Posted on January 12, 2012 by The Polyurethanes team

The power of wind is remarkable; throughout history it has pushed the sails of explorers seeking what lies beyond the horizon. Today, the wind still blows our sails toward a better future as we harness its sustainable power to charge our iPods, laptops and, in the near future, vehicles.

Wind power is destined to be an important contributor in realising the pressing demands for green energy in Europe. The European Union has set a binding target of 20 per cent of its energy supply to come from renewable sources by 2020; in order to achieve this target, more than one-third of European electrical demand will have to come from renewables. Wind power is expected to deliver 14-18 per cent of demand; delivering on these targets relies on the ever improving standards for efficiency and reliability of wind power. One of the current challenges is the weight of turbine blades, which can necessitate large wind farms to produce sufficient power. According to the European Wind Energy Association (EWEA), new lighter blades will have the benefit of being “easier to transport, and of course tackling heavy loading at higher tower heights.” While it is currently possible to generate substantial levels of wind energy at times, new, lighter blades will assist in creating more reliable levels of power throughout the year. 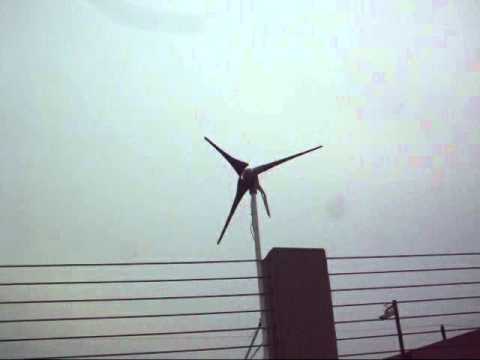 Research teams including the University of Case Western, chemical company Bayer and the Molded Fiber Glass Research Company have been racing to develop wind turbine blades, like those above, which utilise the unique advantages of polyurethane. Previously, glass reinforced polyurethane composites have been used for products including agricultural equipment, heavy-duty construction equipment and watercraft. These recent innovations have adapted this polyurethane material to the specific requirements of wind turbines. The prototype blades have proven in preliminary tests to be eight times more durable, tougher and substantially lighter than conventional models such as epoxy or vinyl ester blades. The “results of mechanical testing for the carbon nanotube reinforced polyurethane show that this material outperforms currently used resins for wind blades applications,” according to Ica Manas-Zloczower, Professor of Macromolecular Science and Engineering at Case Western.

What does this all mean, you ask? The lighter, stiffer blades enabled by the usage of polyurethane allow us to maximise energy production as it permits the construction of larger wind turbines. As the blades also improve on levels of fatigue and fracture toughness, it ensures the blades ability to withstand the stress of high winds. These bigger, stronger blades in turn capture greater amounts of wind energy compared to traditional turbines. According to EWEA, “the blades should [also] be economically feasible, using sustainable materials”; the polyurethane prototype produced by BAYER contains “low, or no, volatile organic compounds (VOCs) and use sustainable raw materials from renewable resources”. Studies on the prototype have shown that the technology “can even be “retrofitted into existing designs at minimal cost”.

The world’s total wind electricity capacity grew 50 times in the period 1990-2007 and predictions are increases over the 2008 level of 10-fold by 2030 and 20-fold by 2050. In 2009 the EU produced 163 TWh of wind power; this meant 106 million tons less of CO2, the equivalent to taking 25% of cars in the EU off the road and enough to power 82 million electric cars! Progress in the industry will inevitably be a combination of research in a variety of technical areas; polyurethane, however, provides a valuable contribution in optimising wind power technology. With the introduction of these next generation polyurethane blades the sky could be the limit for the wind energy production, the EU and you.

To see an EWEA presentation on ‘How wind turbines work’, please click here.

This entry was posted in Uncategorized. Bookmark the permalink.